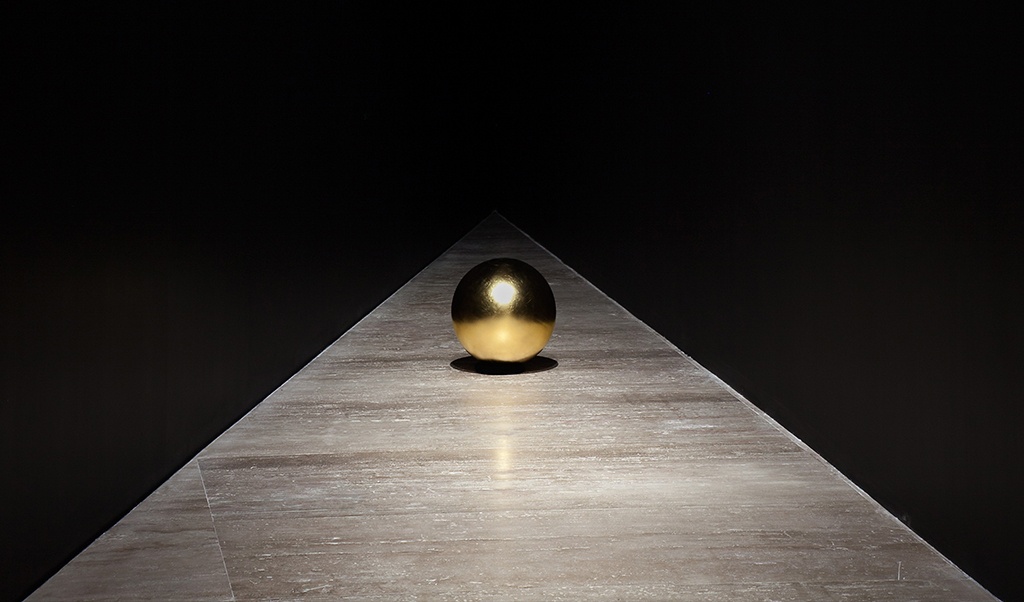 James Lee Byars: ½ an Autobiography is a monographic exhibition of James Lee Byars (Detroit, 1932 - Cairo, 1997) that reviews the trajectory of this conceptual artist and presents him as one of the paradigmatic figures of his generation. This exhibition includes a variety of sculptures, performance, films, documentation and ephemera dating from the late 1950s to the 1980s. This exhibition emphasizes the “performative moment” as a decisive structure in Byars’ practice: an artist who, behind his eccentric costumes and disguises, opened the way to the possibility of an event as an aesthetic experience.

When he was thirty-seven years old—then half an average lifespan—James Lee Byars (Detroit, 1932—Cairo, 1997) wrote his “½ autobiography.” Sitting in a gallery, he jotted down thoughts and questions every time a visitor approached him, and published them afterwards in a book he also titled “the big sample of Byars.” Throughout his life, Byars constructed a myth around his persona, styling himself into a continuous performance that helped make him one of the most provocative and mythical figures in the art of the latter half of the twentieth century.

The exhibition features a selection of sculptures, fabric costumes, performable paper pieces, film, ink paintings, correspondence, ephemera, live performance, and documentation that focuses on the event of Byars’s work. With works drawn from the artist’s estate, as well as private and public collections internationally—including numerous pieces from The Museum of Modern Art, the Getty Research Institute, the Berkeley Art and Pacific Film Archive, Kunstmuseum Bern and De Appel arts center, amongst others—the exhibition engages with the absence of Byars himself, and more generally highlights the inherently incomplete summary that a retrospective offers of an artist’s life.

Obsessed by the idea of perfection, Byars produced a remarkable body of work that strove to give form to his search for beauty and truth. Pursuing what he called “the first totally interrogative philosophy,” he made and proposed art at scales ranging from the vastness of outer space to the microscopic level of subatomic particles, attempting to delineate the limits of our knowledge while enacting a desire for something more.

After studying art and philosophy, Byars moved to Kyoto in 1958, where he spent much of the following decade. Influenced by aspects of Japanese Noh theater and Shinto rituals, Byars created and performed folded paper works at sites including Japanese temples and New York galleries, and made fabric pieces that served as costumes to join together two or more people in public performances. Throughout his career, he also produced a large quantity of printed books, ephemera and correspondence that he distributed widely among friends and acquaintances. Dispersed across a wide geography, they attest to Byars’s desire to be present—however fleetingly—in different places and times.

Byars lived and worked itinerantly, moving between New York, Venice, San Francisco, Kyoto, Bern, the Swiss Alps, Los Angeles and the American southwest, eventually choosing to die in Cairo. Posing his art confoundingly between apparent contradictions—the monumental and the miniscule, the universal and the personal, the luxurious and the minimal, the relic and the event, the spectacular and the invisible—Byars heightens the viewing experience. In the aesthetic interrogations he provokes, he suggests that perfection may occur not simply at the most evanescent edges of form, but also in the attenuated moments of attention spent trying to discern it. A question, Byars remarked, is “the best statement of reality that I know.”

James Lee Byars: ½ an Autobiography
Throughout his life, James Lee Byars (Detroit, 1932–Cairo, 1997) constructed a myth around his persona, styling himself into a continuous performance that helped make him one of the most provocative and my...
Credits

This exhibition is co-organized by Fundación Jumex Arte Contemporáneo and MoMA PS1.

This exhibition is co-organized by Fundación Jumex Arte Contemporáneo and MoMA PS1.