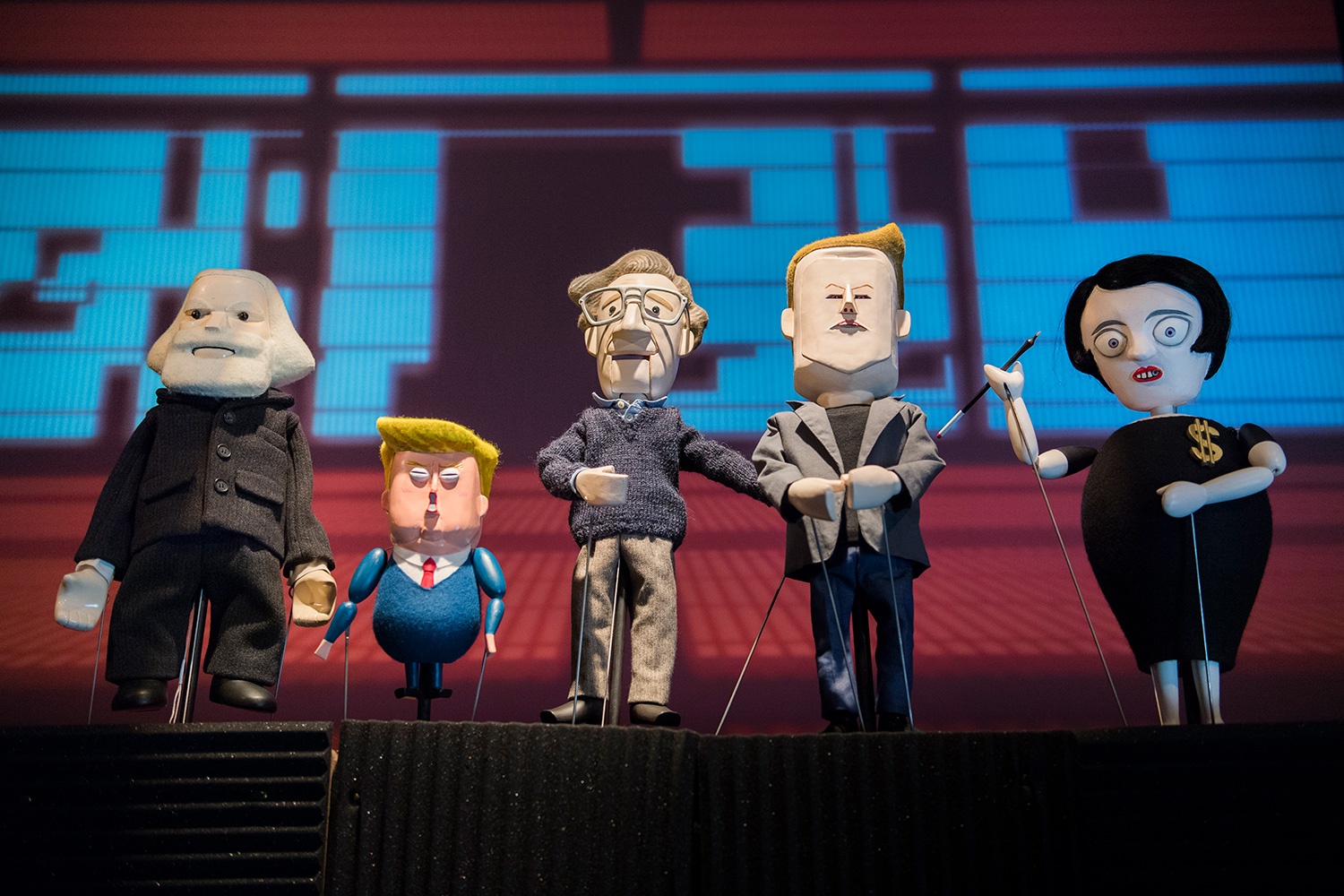 Los robots no lloran (Robots Don’t Cry) is an adaptation for Mexico of the puppet show titled Manufacturing Mischief, created by Pedro Reyes during his teaching engagement at the Massachusetts Institute of Technology (MIT) where he offered a class titled “The Reverse Engineering of Warfare: Challenging Technooptimism and Reimagining the Defense Sector.” The course explored the interplay of imperialism, armed interventions, popular entertainment and the global imbalances created by the West’s fixation on technological advancement. The class resulted in this production which incorporates creative enactments of the actual facts and the (often unasked) ethical questions faced by society today.

As visiting artist in the MIT program in Art, Culture and Technology, Reyes met with Noam Chomsky, to whom he proposed making a play featuring his persona as the protagonist. In Los robots no lloran, the character of Noam Chomsky finds an antagonist in Ayn Rand, who has never been seriously considered in academia but whose pernicious influence remains present, especially among Trump’s followers and the American far-right. Meanwhile, Elon Musk embodies the present-day technocratic hero, in the tradition of Henry Ford and Steve Jobs. These and other characters are brought into the play by a deus ex machina called the “iWay”, a machine that resuscitates authors from their books.

Reyes has integrated puppet theatre into his repertoire since 2008, often using Japanese handmade puppets, inspired by the bunraku tradition that is characterized, among other things, by using puppets capable of a range of facial gestures. Reyes’s puppet plays include The Permanent Revolution (2014), on the life of Leon Trotsky, presented in Museo Jumex, as well as other political satires featuring key figures in the history of political economy, such as Karl Marx and Adam Smith.

In Manufacturing Mischief, Reyes collaborated with director Meghan Finn and writer Paul Hufker. The trio previously worked in the making of Doomocracy: A Political House of Horrors produced by Creative Time in the wake of the 2016 elections in the United States. Manufacturing Mischief premiered at MIT in April 2018 and since then it has been presented at Carnegie Mellon University, Pittsburgh; Canadian Stage, presented by the Power Plant, Toronto; The Tank, New York; and Serpentine Pavilion, London.