Money is a particularly thorny subject for art, one that unsettles the division between cultural value versus economic ones. It also touches on a commonly held feeling that art is a luxury and elite commodity—which is in part true of the work held in art museums and personal collections, or that traded in auction houses to headline figures. Yet it overlooks the reality that the vast majority of art does not have such financial worth, and that art of different types surrounds in our homes and workplaces, and in the media, as ever present as the money we use daily. When contemporary artists choose to focus on representations of money, commerce and economics in their work it is not only critical position but also an exploration of representations of an inherently conceptual ´thing´ that we take for granted.

“The Dematerialization of the Art Object from 1966 to 1972”, as artist and writer Lucy R. Lippard would go on to call the advent of conceptual art, was a radical turning point in contemporary art. Nevertheless, it should not be seen as isolated to aesthetics. Conceptual art was accompanied, indeed responded to a broader revolution that dematerialized information of all kinds through computing and communication advances. How money was used and circulated was one of the most significant transformations at the time that impacted on day to day living. Most notably 1966 saw the introduction of the universal credit card. Not only did this begin to replace cash, but, and perhaps more significantly, it deferred repayments into the future. One no longer needed to have money in one’s account, or even ask for a specific loan, in order to spend freely, until repayment day. The spirit of conceptual art was along the same trajectory. Without an object, the work of art ‘lived in one´s head’ to paraphrase the title of Harald Szeemann’s seminal exhibition of conceptual art from 1967.

1
Lari Pittman’s paintings from the 1990s frequently included the logos of major credit cards disrupting the spaces produced in their compositions that include sexual acts in silhouette, garish hands with brightly coloured nails, cowboys and other archetypal characters along with decorative patterns. In this melee, credit is part of an artificial landscape of desire, now an essential, if corrupted tool in its immediate fulfilment.
2

In fact, money is an imaginary object. While we put great value on what we have, it is a tool of exchange. Even cash itself is only a ‘promise’, an intermediary object to delay a direct exchange between things of different values. Money, from its outset, is a delay, an interstice in time between acquisition and expenditure. How, then, it is represented through charts and symbols, and how these relate to experiences, is an aesthetic concern for artists.

Gabriel de la Mora’s signed cheque has no worth, or rather only a potential one that plays with the idea of the artwork’s value. Selling a blank cheque is in usual terms a risk, giving over the power of one’s own money to someone else to decide. De la Mora’s work contains a subtle indication of this fictional open book, and an intertwining of money and person, the signature is carefully formed from a human hair.

3
4
Another recognisable image of market economics are charts tracking commodity and currency value as it rises and falls in peaks and troughs over time. While few of us may use or understand the details of such charts, they instantly infer trading, stocks and shares. Gabriel Kuri’s large-scale sculpture sees such a chart expanded into a platform containing various objects including an office chair and other everyday objects linking tangible life with the intangible influence of economics. Kuri’s work has frequently looked at the residue of commerce, using till receipts as both material and image including the hand-woven rugs reproducing the usually discarded, ephemeral traces of minor cash purchases. In Kuri’s practice, drawing from the visual culture of the economy provides a point of contact with lived experience and the abstract landscape of money, frequently around the areas normally overlooked or discarded that nevertheless leave their trace in our lives.
5
These almost invisible threads of the economy through lives appears in Marco Rountree Cruz’s installation is a curtain showing the list of winners of mortgage loans. Hung from the ceiling to form a point, at first it might appear to be an upward arrow indicative of success. Yet the information itself, revealing the competition for financial support that realizes dreams of a permanent home reveals the fragility and happenstance of decisions over people’s basic needs.
6
7
8

While initially appearing as an abstract composition, Eduardo Abaroa’s superficial inventories and balances also suggests the inescapable influence of economics through its title. The application of glue to paper implies tabulation charts. Candida Höfer’s photograph of the Nuremberg Bank shows one of the hidden corridors of power through which money travels. It also adds a human scale at economic cycles in its vision of empty and clinically corporate passageway.

Höfer´s photography shows the safe boxes of wealth locked away by individuals. Wilfredo Prieto’s One, on the other hand, hides wealth in plain sight with a single real diamond mixed with thousands of imitations. It invites speculation on whether we might be lucky, get rich through a chance find. Between these two works, Höfer and Prieto present us with the dreams and the inequalities in which modern capitalism is based.

Pedro Reyes’s puppet shows and videos in the Baby Marx series have examined in humorous ways the influences of economics within contemporary politics and thinking. As the foundational name in economics, Karl Marx strived for conditions that would overthrow the inequality capitalism. produced. Other thinkers, such as Adam Smith, with whom Reyes’s Baby Marx debates in one of the early instalments of the series, saw capitalism as a great leveller.

The intention is to make these abstract concepts more tangible, understandable even for children, and provide a critical and satirical caricature of how money shapes our lives is at the heart of Reyes´s project. The most recent episode Robots Don´t Cry (2018) focused on modern and current affairs. The characters included Donald Trump and Ayn Rand among its puppet-players. Rand was the author of novels such as Atlas Shrugged (1957), a modernist prose that has been adopted by free market-led politicians for its celebration of wealth and libertarianism from the 1980s to the present, a forebearer of Trump´s ideology.

Through these references and representations of economics, contemporary artists have expanded their idea of what constitutes today’s landscapes beyond the physical. Nevertheless, there is a precedent for such representations in art. Among the most notable examples are Thomas Gainsborough’s portrait Mr. and Mrs. Andrews (1750), wealthy landowners who sit in a landscape showing the then new land enclosures, part of an agricultural and economic revolution at in the 17th century Europe. Earlier examples include Holbein’s masterpiece The Ambassadors (1533) who stand before a table filled with symbols of wealth bought about from global trade. Therefore, the tradition of art depicting capital is part of the history of art as much as its present. What has changed, however, is that economic systems have moved from being inscribed in the landscape to circulating as concepts through intangible symbols. 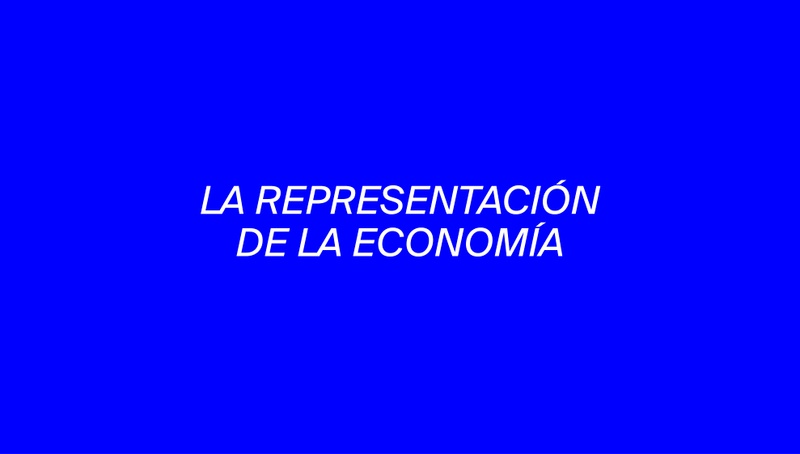