An ‘action’ has become part of the essential lexicon of contemporary art, yet it is not part of a defined movement or theory. Instead actions encompass performances and proclamations, events and intimate moments. They may be performed in isolation, or as part of gatherings in which the audience become participant. The artist’s body may be imperilled, or they may simply be the agent of some change in the environment. Yet this broad range of meanings declaring an action shifts attention away from physical work of art, to the act of its making. And while an action might be as simple as a gesture or a declaration, it does not exist only in the moment it is performed. As art historian Galina Yelshevskaya suggests: “What happens during the performance is one part. Another is what is documented. And yet another is the way in which the performance spreads in rumours and the news, and how it remains in people’s memories.” 1

The transformation of art into an action was conceived in the earlier 20th century through radical ideas of surrealists in France, Constructivists in Russia, and Futurists in Italy, among other Modern Avant-Garde groups, many of whom proposed violent and destructive acts that could be art, if not realizing them. In the Second Manifesto of Surrealism, André Breton suggested: “The simplest Surrealist act consists of dashing down the street, pistol in hand, and firing blindly, as fast as you can pull the trigger, into the crowd”. 2 Wolfgang Paalen’s 1943 text Totem Art, became a link between European Surrealism and “Action Painting” in the Americas, proposing that the artist enacted something akin to an ecstatic ritual when making their work. These means of understanding painting, particularly Abstract Expressionism, as distinct from any form of image or visual representation, put the making of the work as of equal importance to its final form, the canvas a record of the act. 3 This distinction influenced the new artistic developments in the 60s - Conceptual Art, Happenings, Performance, and even Land Art. In this trajectory, actions and how they are recorded and circulated became a fundamental part of contemporary art.

Vito Acconci was an exponent of actions in his early work. Blinks takes place on the street, the physical imperative to close one’s eyes becomes the motor to take photographs‒capturing the image that is missed by the eye. Acconci’s work shows these images, alongside a report that is factual and personal, complicating individual and public thoughts and deeds.
1
2
In his performed accidents, Bas Jan Ader allowed himself to fall from trees or rooftops and into canals, turning his body into an object subjected to displacement under the forces of gravity. Documented in seeming isolation, rather than staged for an audience, Ader’s acts are loaded with a tragi-comic atmosphere that has been described as ‘emotional conceptualism.’
3
“On the outskirts of the ruins of Palenque or in the skirts of Coatlicue, rocks were overturned; first the rock was photographed, then the pit that remained. ‘Under each rock is an orgy of scale,‘said Coatlicue.”
- Robert Smithson
Robert Smithson is known for his Land Art, or Earthworks as he chose to call them. These interventions in the landscape included actions as well as large-scale constructions, such as the iconic Spiral Jetty in Utah. Smaller gestures were also part of his repertoire, such as Overturned Rock (1-6). Importantly, Smithson recognized these actions within a dialectic between ‘Site’—the real landscape in which the work was made—and the ‘Non-Site’ of the gallery where it would be presented. Writing also played a part, subjective journeys describing not only the physical spaces but also the literary background.
4

Francis Alÿs adopted some of the traditions of land art in an action in Peru. He describes Cuando la fe mueve montañas, Lima, Perú, 11 de abril de 2002 [When Faith Moves Mountains, Lima, Peru, April 11th, 2002] as “my attempt to democratize Land Art” with 500 volunteers shovelling earth from one side of a large sand dune to another. 4 The result was a minor displacement of the hillside that exists as much in the stories that the workers continued to tell as it did in the landscape. As much as it is informed by land art, then, it was a happening, an action completed and maintained by the participants.

Alÿs’s work began with actions in the streets of Mexico City, taking everyday activities out of context, diverting the social and economic cycles that exist informally in the City or placing himself within them. These took different forms of documentation—from videos, to paintings, to postcards that were distributed, entering in the circulation and mirroring the spaces in which the actions themselves appeared.

5
“The nature of actions: in each course of action a great variety of agents seem to barge in and displace the original goals.”
- Bruno Latour
Actor Network Theory, a theory proposed by Bruno Latour et al., looks at complex interactions. For Latour, an actor need not be human, but may be an object, technology, situation, or any other ‘thing’ that affects, and is part of a network. All have agency through their relations and affects. This new perspective was applied to art in the 1990s through writing and exhibitions of Nicolas Bourriaud most concretely in his book Relational Aesthetics that noted a shift in the work of art away from a singular isolated object into a range of associations.
6
7
In this sense, actions may occur in any form of social, economic or physical space, and the work’s circulation within them is its completion. Walead Beshty’s Copper works are placed into mail systems, a legacy of mail art, and the action is carried out by these transits. Placed into the fixed weight and dimensions of a Fed Ex box and mailed, the object accrues material traces, remnants of the action of its movement that draw attention to the act of transporting and exhibiting art. Moyra Davey’s photographs equally bear the marks of their journey. Postage stamps mark that the images have moved through economic and distribution systems before they are displayed.
8
9
Another distinct form of actions emerged in the 1960s in Europe, one that had a visceral rather than conceptual base, yet equally based in “ecstatic rituals”. A number of Viennese artists began working with events, grouped under the title Actionism although with distinct intents. Whether they occurred privately in the studio, or in gatherings, artists such as Günther Brus, Otto Muehl and Hermann Nitsch created abject events that shocked and provoked. Their actions drew from ancient religious activities, turning them into modern, excessive events. Nitsch created expansive ritualistic events over days where animal carcasses, orgiastic dances, fake crucifixions, and other transgressive acts involved the audience who attended them. While theatrical in their appearance, the removal of the stage and protagonism towards culture set them apart.
10
11

Vanessa Beecroft’s actions in the 1990s and early 2000s took place inside and outside the museum, with models congregating semi-clothed to confront the audience. Their idealized bodies become abject under scrutiny and the models appear to scrutinize the public in return. Spencer Tunick’s actions invite the public to join mass naked gatherings in public spaces. Far from the orgiastic participation of Nitsch et al, they still operate to disturb the statu quo of social norms, distinguishing them from theatre.

And so, while actions are not a defined movement in contemporary art, they are an inherent concept within it. Whether made explicit or simply inferred, the act of creating a work is always a significant part of its context, and how it is to be understood. By focusing on actions, art can be seen as a network forged between artist and their work, and between what is presented in the gallery, how it came to be there, and how it affects the viewer. 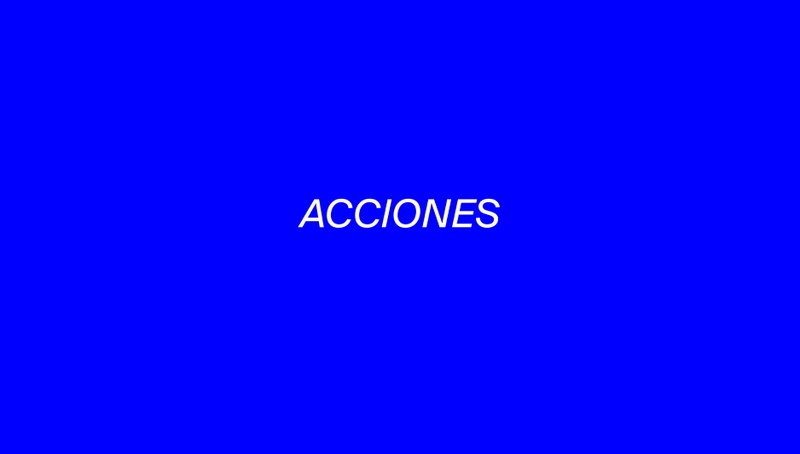