Color is central to art and making, not only as an element, but also as an idea. Throughout the years, artists have affirmed color as pure sensation, embraced it as a tool and even denounced it as decorative and decadent. Those who loathe color have had as much to say about it as those who love it. Color is “diverse and divergent; fluid, elliptical and contradictory; often obscure, esoteric or strange; sometimes funny, and altogether fascinating.”1 .

Umberto Eco argues that the puzzle of color is a cultural one, for as we filter our sensations and perceptions through linguistics they become tainted by the cultural information that dictates the ways in which we interact with the world.2 In this sense, the experience of and interaction with color is conditioned by the culture and history that surrounds it. Thus, Jean Baudrillard’s argument that colors derive their significance from outside themselves and are simply metaphors for fixed cultural meanings is proven correct as the histories of both aesthetic and racial hierarchies come together to create a system that places certain colors, i.e. white or whiteness, above “other” colors whose meaning becomes attached to specific nations, cultures and races as identifiers. 3

Evidence of the prejudice to which color has been subjected in the West can be found as far back as Aristotle, who established the superiority of white by advocating for its objectivity and connection to the mind as opposed to the senses and the body.

The white marble statues and temples of Greco-Roman times later influenced the production of artistic capital and an admiration of their beauty and chromatic lack became a quality that was sought out by artists in an effort to emulate the ‘perfection’ achieved. This ideal however, emerged from ruins that had long been stripped of the color that decorated them and marble statues that were copies of Greek originals cast in bronze. During the Renaissance artists looked to the Greeks and Romans for inspiration, and in an attempt to revive Classicism touted the importance of unity, order, form, and off-course whiteness. In the early 19th century, Neoclassicism once more resurrected the same ideas; forming part of a cycle that kept reviving the past and with it the perceived superiority of whiteness. This art historical narrative, however, is in no way solely accountable for the ways in which we group, categorize, and give meaning to color.

Widespread Colonialism in the early 16th century solidified the position of the Westerner as superior; categorizing the indigenous people of the colonies as inferior, and “other”. The racial bias and separation of white Caucasians from “colored others” continued in both the tradition begun by Aristotle that dictated the supremacy of white, as well as the colonial tradition of domination and control. The artistic production of indigenous populations, and its use of color was seen as a threat to be either exterminated or controlled. The colonizer’s need to control land, resources and human labor translated into a total control over the production of goods, resulting in a racialization and exotization of that produced in the colonies. Thus, the theoretical ideas that had surrounded a hierarchy of colors for years became inextricably connected to new systems of prejudice and discrimination based on race. 4
1

Primitivism, like Colonialism, exploited Non-Western cultures in its search for new inspiration. Although borrowing from Non-Western cultures, Western thought still considered the color and identity of the art and people of these cultures primitive, savage, sensual and all around “other” to the rationality of the Western mindset.

In the late 20th century, as art began to take on new forms and explore softness, industrial color and a removal from the flat pictorial surface, art critics and proponents of Formalism lashed out at any type of artistic production that wasn’t formally rational. As this type of criticism was codified into artistic practice all of the “others”: color, the primitive, the decorative, the female, the soft, became one large conflation of unwanted and unapproved subjects or forms within art. Color and irrationality became tied to one another, just as the decorative, female and primitive were tied to irrationality. The “other” was seen as a corrupting influence that had to be controlled by the superior rationality of the white, Western, and male.

“Color lets us look at some of the ways we grade, order and group our experiences […] at some of our unstated habits of thought, some of our preferences and some of our cultural prejudices.”5 In contemporary art, some makers continue to ascribe to the historically codified notions of the ways in which color has been defined and deployed theoretically and functionally. Whilst other artists actively seek to break the mould, and use of white or “other” colors purposefully to analyze or criticize the cultural structures that have influenced our understanding and use of color.

2
Ryman endeavoured to create enlightenment and a reverent experience of painting through “[…] whiteness [that] refiningly enhances beauty, as if imparting some special virtue of its own.”

“Color lets us look at some of the ways we grade, order and group our experiences […] at some of our unstated habits of thought, some of our preferences and some of our cultural prejudices.”5 In contemporary art, some makers continue to ascribe to the historically codified notions of the ways in which color has been defined and deployed theoretically and functionally. Whilst other artists actively seek to break the mould, and use of white or “other” colors purposefully to analyze or criticize the cultural structures that have influenced our understanding and use of color.

The perceived neutrality of white, or white as an aesthetic ideal, is reflected in Fernanda Gomes’ Sem titulo [Untitled]. Gomes turns the leftover and lost, the disregarded or discarded mundane objects of daily life into fragile constructions that trace everyday actions. Painted white, and only ever white, she elevates the status of what she calls ‘things’ through the use of a color she interprets as the most complete color; full and receptive. Robert Ryman’s Course forms part of a life-long exploration into the qualities and possibilities embedded in the use of white. His stringent approach eliminated imagery, color and even emotive brushwork in an effort to reflect his conviction that every visible detail of a work contributed to the viewer’s experience of it, including and importantly the white wall supporting it. Ryman endeavoured to create enlightenment and a reverent experience of painting through “[…] whiteness [that] refiningly enhances beauty, as if imparting some special virtue of its own.”6 Whites that spread outward and become part of their surroundings.

3
4
The contemporary art world can for the most part be appreciated within the sterile and ‘pure’ white-walled environment of museums and galleries. This “whiteness is both specific and ill-defined. It is the norm embedded in the institutions […] the museum, and the university. It is [rarely] mentioned, but it is presumed to be the baseline, articulated through an amorphous blend of social mechanisms.”7 Julieta Aranda’s Untitled (Coloring Book II) plays with this background by using it as the ‘neutral’ surface upon which viewers are invited to imagine new colors. The work consists of a collection of commercial paint titles applied to the exhibition wall under a corresponding white rectangle, a collection of indices that exercise the mind through the absence of color. By appropriating names from a color chart, and asking the viewer to reimagine them, Aranda generates an alternative transaction of cultural capital. What Colour by Stefan Brüggemann combines layers of cultural history and overlays them with his iconic use of text statements. He considers the white-walled gallery space precisely by asking what “other” color it should be painted, as a way to reconsider established exhibition conventions.
5
Whiteness and its relationship to color does not function solely as an element within an artwork; it is also embedded into conversations and ideas about race and representation. Conversations that contemporary artists have at times felt the need to participate in through the reflections their work inspires. The divisions between white and “other” colors are reflected in the division between white people and “others”; people of color from around the world that cannot and do not wish to be categorized as white. In Serie: Fenotipos [Series: Phenotypes], Andres Carretero photographs Mexican subjects with Albinism. Carretero’s work touches on the ethnographic and racial, for although ‘white’ these people are part of a minority in Mexico and suffer from prejudice and discrimination. This work comments on and criticizes the prejudice that arises from that which falls outside the norm, which even if white is considered unknown and “other”. Andres Serrano tackles race through portraits that represent the different faces of the USA in his series America, which evolved as a reaction to the terrorist attacks on New York and Washington and a question regarding who is considered American. Serrano’s preoccupation with color is reflected in this series, particularly in the pairing of America (Chloe Sevingy) and America (Snoop Dogg), which function as ciphers that play reductively to type in a bright representation of a unified and equalized USA.
6
7
8
9
Racial color and the use of color have been tied together throughout history, forcing colors into the role of identifiers. Even given the globalized state of the world and the exchanges between cultures and artists, culturally conditioned use of color and the ways it is employed to communicate identity remain intact and in place. Claudia Fernández’s La belleza oculta en la propiedad ajena [The Beauty Hidden in the Property of Others] forms part of a practice dedicated to examining the legacy of Mexican objects as containers of historic and visual value. Her photograph of the richly colored facades of Mexican homes is aesthetically tied, through the language of color, to the ways in which we know, understand and consume the rich cultural heritage of making in Mexico. Her palette distinctly recalls the artisanal practices that abound in the country. Birgir Andrésson examines aspects of Icelandic culture and national identity through color, particularly a set of colors that the artist designated as being uniquely ‘Icelandic’ in the 1980’s. In Black and white classics (Blackmail 2075-Y60R / 7005-Y50R), Andrésson assigns Icelandic colors that are part of his fictional Pantone color set to existing cultural artifacts and by doing so creates a visual language in itself that is specifically culturally attached to an Icelandic understanding of color.
10
11
Color as the property of a ‘foreign’ body, as a property of the primitive, queer or pathological, has been long in the making. Aristotle believed that colors, because of their ability to ensnare the senses, were the complete antithesis to objectivity; and for both Plato and Aristotle they acted as drugs. Damien Hirst’s Spot Paintings mark a connection between color and drugs. In Cefoperazone, titled after an antibiotic, he depicts brightly multi-colored dots organized into neat lines that can be read as diagrammatic images of pharmaceutical pills. Hirst’s piece investigates and challenges contemporary belief systems that trust fully in medicine but not in art, without questioning either. Rainbow American Flags for Jasper in the Style of the Artist’s Boyfriend by Jonathan Horowitz critically examines sexuality and queerness by recreating the iconic Three Flags piece by Jasper Johns as an American flag invaded by the colors of the LGBTQIA+ flag. Color is employed as a signifier for the queer, and to radically question the value systems of contemporary society that still require that the “other” be marked as such.
12

“Color threatens—or promises—to undo all the hard-won achievements of ‘culture’. It threatens—or promises—chaos and irregularity. Color threatens disorder—but also promises liberty.”8 Though color has been discriminated against in a variety of forms—technical, moral, racial, sexual and even cultural; it also serves as a vehicle for subversive exuberance, allowing for radical statements that challenge race, class and taste. It is precisely through color that Western art and making escape the regimes and hierarchies established by Academic art. 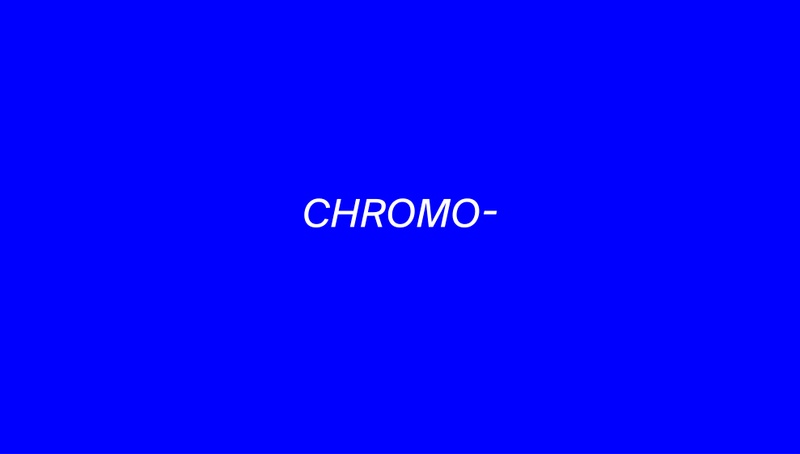